At times, on a journey, you come across something unexpected, a discovery that lends a bit of excitement to your adventure.  When Bill and I were last in Michigan several years ago, we visited Mackinac Island, a place I hadn’t been to since I was a kid.  When I had been there with my family all those years ago, we had ridden bicycles around the perimeter of the island.  Bill and I walked some of the paths farther in, and saw many wonderful wooded landscapes, and , a fort that I had never seen before.

Flags being raised at Fort Mackinac

Fort Mackinac was a well-known fort, and we got there early enough to see these Girl Scouts raise the flags that day.  The fort we discovered though was not nearly as well fortified. 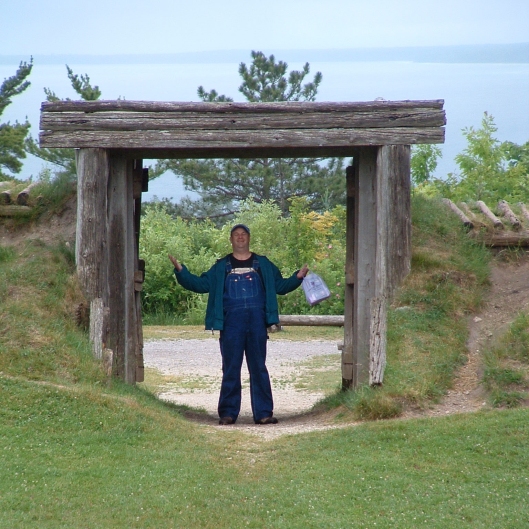 Bill in the doorway into Fort George/Fort Holmes

The fort was not much more than raised dirt walls, but according to the sign nearby it “was the bulwark of British defenses in 1814 when the American attack was repulsed.”  I could see why.  It was at the highest point on the island, and looked straight down on Fort Mackinac.

Looking down from our newly discovered fort, we could see the flags that we had watched the scouts raise a few hours before.

Not all discoveries come in the form of forts or buildings though.  With genealogy, discovery often takes the form of documents; various records and photographs.

One such genealogical discovery I made was in the documents my father had sent me.  One in particular I called “genealogy gold”.  It was the obituary of my paternal great-grandfather, William H. Taylor.

William H. Taylor, age 75 years, 3 months, and five days, who died March 15th, at his home here, was buried in Park Cemetry last Friday afternoon, following religious services which were conducted at the Methodist Church by the Pastor, the Rev. W. J. Velvick.

Mr. Taylor was born on Nov. 1o, 1857 in Upshur County, West Virginia, the son of John and Eliza Taylor. He moved with his family to Nebraska in 1884 and for nine years resided in that state. In 1893, he moved to Gallatin, Mo., where he made his home for sixteen years, moving from there to Arkansas, where he lived for three years. In 1913, he moved with his family to Malden and opened a furniture store having operated that business up until he was stricken with paralysi two years age. Mr. Taylor suffered his first paralytic stroke while serving on the election in1931, and had been unable to continue his business after that time.

He was married on March 15, 1883 to miss Georgia Chrisman and to this union nine children were born, three of these having preceded their father in death. Mr. Taylor is surviced by his wife and six children, these being: Roy Taylor of Carbondale, Ill.; Mrs. Dell Lukeheart, Ceadar grove, Iowa; Mrs. Ethel Littell, Mounds, Ill.; Mrs. Maud Hester of Malden;Mrs. Hazel Nobel of Parma; and Ralph Taylor of Flint, Michigan.

On the date of his death, Mr. and Mrs. Taylor, were celebrating their golden wedding anniversary, having been married for fifty years.

(handwritten) 2 of the songs (Some Day We’ll Know, Abide With Me)

Wow!  I was blown away!  Basically this one document confirmed every bit of census data that I had already found, and filled in a few details as well.  Within about a year of marrying my great-grandmother, they had moved to Nebraska, where census data showed that five of their children were born:  Millard Dee (1885), Roy Oscar (1887), Boyd (1888), Lucy Dell (1891), and Ethel (1892). In 1893, the family moved to Gallatin, Missouri in Daviess County and lived there for sixteen years, enough time for three other children to be born:  Anna Maud (1894), Hazel (1896), and Floyd Ralph, my grandfather (1900).

My Grandfather and His Family

Now looking at the fact that 9 children were born and only 8 were living, I knew that child number nine could have been born in West Virginia prior to the first move, in Nebraska, in Missouri, or possibly somewhere along the road.  My best guesses were that, barring the possibility of a twin, it would be a child older than Millard, a child born in the gap between Boyd and Lucy Dell, or in the gap between Hazel and my grandfather.

They would live there until about 1909, when they moved to Arkansas, just in time to be there for the 1910 census.

Now there was no question; my family had indeed lived in Arkansas!

With the information from the obituary, I was now able to figure out which of the children were still living and which had died.  Ethel, Maud, Hazel and my grandfather were still living with their parents.  Roy and Dell were listed in the obituary.  Therefore, Millard and Boyd had died.  I was able to confirm this. I found a picture of their grave marker at findagrave.com.  Boyd died in 1905; Millard in 1907.  They were buried in Gallatin, Missouri.

Finally, my great-grandparents didn’t stay in Arkansas long; they moved to Malden in 1913, which is where they lived out their lives.  My great-grandfather ran a furniture store until he had a stroke in 1931 when he was serving on the election, and he died in 1933 on the day of his golden wedding anniversary.  It seems like the Ides of March was both a good and a bad day in his life.

I am not sure why this obituary was typed rather than a newspaper clipping like the one I was given for my great-grandmother.  Perhaps the copy was in a very deteriorated condition, and the person who typed it wanted to retain the information, even if it wasn’t in its original form.  Perhaps they copied it from a clipping that belonged to another member of the family.  This likely was done before the age of the Xerox machine.  It could have also been typed by one member of the family and mailed to another farther away.

The one piece of information that is on this typed copy though is one that you would not find in the newspaper.  That is the handwritten note that indicates two of the songs played or sung at the funeral.  Whoever wrote that down was either at the funeral or had spoken to someone who had been in attendance.

Turning aside from my own family tree, I had been travelling the path of my husband Bill’s ancestors.  I enjoyed learning about his Transylvanian heritage, and discovering the ships that had brought his great-grandparents and grandparents to the United States.

Now, I turned my attention to Bill’s mother’s side of the family.  Once again, I was entering data for all the family members we knew of, and I was getting hints here and there to explore further into the past.  Already, we had seen some of the direction that this path would take us.  Bill’s cousin had shared with us information about the research a friend of his had helped him with, and how it had taken them back to Armstrong County, Pennsylvania, where Bill’s mother’s paternal line had settled.

However, the trip I was taking into this portion of the family tree was soon interrupted.  It was not because we had run out of items to research; we had barely scratched the surface of what Bill’s cousin had told us.  The interruption came from the fact that I had received new information from my father regarding my side of the family.  It was time to return to my original path.

The information my Dad sent me came to me via email over the span of a few days. My original request had been to see if I could get any more information for the brother whose children I was trying to locate.  We were still waiting for the military records my Dad had requested.  Apparently, because my Uncle had at one point served in a classified area, the military wanted to find out exactly what we were looking for.  They actually called my father to discuss it with him.

So, Dad started by sending me the obituaries he had for his brother, which at least then gave me dates of birth and death.  One was from the Flint Journal, the local paper in my home town.  The other was from the Arkansas Gazette, which was from the state my uncle was residing in.  In the email, my Dad mentioned that he had other obituaries and asked if I wanted them.

And so, I began getting email after email (nine in all). Besides my uncle’s obituary, I got his funeral card.  My father had obituaries for his other brother and sister as well.  I received funeral cards for his parents and for my Grandma Opal, my grandfather’s second wife.  My Great Aunt Jeanette’s obit was there, and there was a funeral card for her father, Joseph McCombs as well as his obituary.  There was a funeral card for a cousin of my father’s, one that I remember very well, and for his father, my Aunt Jeanette’s brother-in-law, James Slaughter.

There was even more to come.  My Dad sent me death certificates for both his parents and for my great-grandfather, Joseph McCombs!  He also sent me obituaries for both of my Taylor great-grandparents, as well as a newspaper story about a family reunion, and a “ripped from the headlines” story that could very well have been a plot of a story for Law & Order:  SVU if the show had been on back then.  That story intrigues me, and though it does not appear to have been about my family, someone kept it for a reason, and I’m curious as to why.

So, my trip through Bill’s family history was interrupted by flood.  It was a flood of information about my own family that had me postpone working on his tree a while, so I could delve back into mine.  I was glad I could.  One of the pieces I mentioned turned out to be quite a discovery!