For a while, it seems like I have been spinning my wheels. The adventure has gotten bogged down, and less exciting. While I have been successful in broadening my knowledge of certain family members, the ones I really want to find out more about seem to be quite elusive. After a time, it just seems like I am getting nowhere fast.

Much of my searching has been through sites like Ancestry.com and FamilySearch.org. For relatives in Missouri, I have made use of certain state resources, particularly the search for death records. Going farther back, the West Virginia Division of Culture and History has a vital research records search that has been helpful.

To try to make some headway, I decided to venture off to a few sites that I have made limited use of in the past. These sites both do charge after an introductory period, but they also have the ability to link found records directly to Ancestry.com, which makes it easy for users of Ancestry’s site to add records not available on it.

So, I decided to go off the beaten path; away from the records I was very familiar with, and toward the unknown. What would I find? Would I find anything? And, would what I found be useful, either in adding information to people I already knew about, or in leading me to previously undiscovered relatives?

My first stop was to Newspapers.com. Up until recently, my searches had been on names of people only, and the results have been hit or miss. On a recent search for members of my husband’s family though, I found several records, not in the San Francisco papers that I expected, but in a small local paper in Petaluma, California, the Petaluma Argus-Courier. 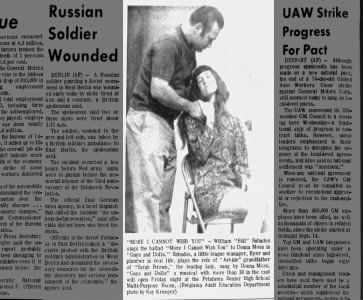 The clipping above is of my father-in-law rehearsing for a local production of “Guys and Dolls”. I was able to find several clippings of Little League pictures of my husband and his brothers (some with their dad as coach), as well as an article that mentioned his grandmother. There were also lots of clippings of activities my in-laws took place in: local theater, square dancing, and cards groups to name a few. It was really nice to get an idea of their life in Petaluma, which was years before I became a part of the family.

So, I decided to apply the results I got for Petaluma to other local areas where family was located. What would I find in other areas?

At first, my searches came up with nothing. Unfortunately, Malden, Missouri and Flint, Michigan didn’t have their papers digitized on Newspapers.com, so I struck out on those places. I felt that Nebraska and Arkansas might not yield much, so I decided to try a state where I knew a few relatives lived, but wasn’t sure, since one was a cousin of my father, how much searching for them would reveal.

My father had a cousin, Thurmon Taylor, that lived in Carbondale, Illinois. It turned out that Carbondale did have a local paper, so I decided to do a search for Thurmon. It did not reveal as much as I had hoped. There was a list of property assessments that listed him, and a mention in an article. It did not give me the depth of information I had found for my husband’s family in the Petaluma paper.

I decided to try another line of inquiry. I knew that my father’s family on his mother’s side had often visited Illinois. I thought Carbondale was one of the places they went, so I decided to search the Daily Free Press for ‘McCombs’.

At first, I thought I was going to strike out on this as well. However, I happened to see in the thumbnail of an article the name J. J. McCombs (my great-grandfather perhaps?) and “Mal-” (Malden?), and decided to bring up the article. There, on the Society page, was this brief note: 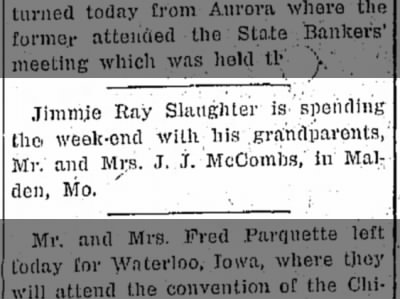 Bingo! This was definitely my family. I knew Jimmie Ray Slaughter. He was also one of my Dad’s cousins, this time one from his maternal side. When I knew Jimmie and his parents though, they lived in the Detroit suburbs. I had not known they lived in the area of Carbondale, though it made sense why I had heard of trips from Malden to this part of Illinois. His mother was Jessie Rae McCombs, the sister of my grandmother.

I decided that it would be best if I searched Newspapers.com for the name “Slaughter” in the Carbondale paper. I got over 1,000 hits. However, most were for the word “slaughter” rather than the name. When I found the name though, I got a better picture of the Slaughters lives in the Carbondale area. Jessie was involved in a few social clubs, including sewing circles, Sunday School groups, and a club with the initials J. U. G., which my guess is that it stood for “Just Us Girls/Gals”. There were several trips by the family or its individuals to Malden, Missouri, and I found a mention of Paducah, Kentucky, and even a longer trip to parts of Texas and Mexico (Jessie’s sister, Donna, lived in Texas).

Most of the articles I found were quite pleasant, but there were two articles that were quite tragic. The first was about their oldest child, Bettie Joe Slaughter. 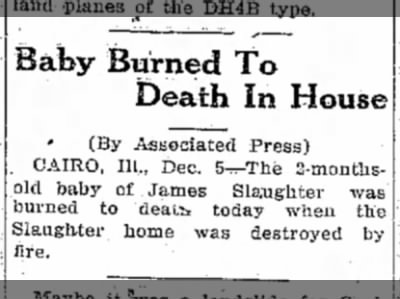 So, their daughter died in a fire that destroyed their home. I cannot imagine the total sense of loss. You not only have lost your possessions; you have lost what is at that time your only child. How heartbreaking that must have been!

This was not the only child they lost however. 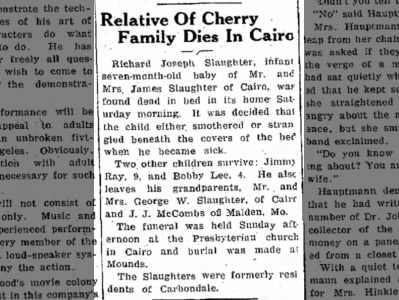 So, now, their youngest son had smothered to death under the covers of his bed. I still cannot imagine how Uncle James and Aunt Rae would have felt. This was not a story I remember, and usually stories of loss I have found are those that are often kept under wraps by those of the earlier generations. Even my mother never really talked about the death of my younger brother a few days after his birth, even though I know she felt his loss even later in her life.

I would say that a search of local newspapers in areas you know your family has lived has a good possibility of turning up information that may help flesh out the lives of your ancestors. If you happen to be in an area near where your relatives lived, a trip to the local public library may yield information. Otherwise, search online resources to see what you may find.

2 thoughts on “Off the Beaten Path – Part One”