For as long as I can remember, I have always loved maps.  Even from a fairly young age, I understood that a dot on a map represented something out in the world; a city, a place that I could travel to and explore.  I would consult maps whenever the family planned a vacation.  I wanted to see what roads we’d travel, and what cities we might go through.  Even for lesser journeys, I might check a map.  Our family would go to Cedar Point in Sandusky, Ohio every few summers, and especially as the park added more and more rides, I would check the map to find the quickest way to get to the next roller coaster.  Even at the mall, I would consult a “You Are Here” map to see how to get to the new shop that just opened. 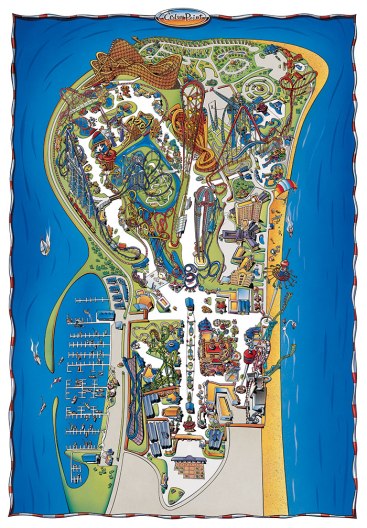 As you can see, there are lots of coasters. It seemed like every few years, another one would open.

In my family, I typically took the task of the navigator on long trips.  I would keep the road atlas with me, and would look at it from time to time, and let whichever parent was driving (usually my Dad), know when the next turn was coming up.

In a genealogical journey, you don’t necessarily have a map to follow.  You might get some data that might point you in the right direction, but the final destination can be ever elusive.  However, maps do have their use in genealogy.  In particular, I’ve found that historic maps can be quite helpful in finding out more about the places my ancestors lived.  Today, I’m going to share with you a few resources that I’ve found helpful in my own research.  Clicking on any map will take you to its source.

From 1000 AD until the present, there are maps available from several sources that can be viewed online.  You can use a map feature to find what you’re looking for, or you can type in a place to search for it directly.  The maps show everything from topography and resources, to city streets. 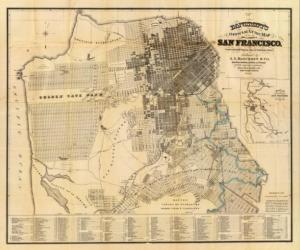 This map shows San Francisco as it was prior to the 1906 earthquake. This was the San Francisco where Bill’s maternal grandmother was born.

While the maps of the David Rumsey collection can be viewed through the previous link, I wanted to make special mention of this group of maps.  Many of these maps are rare maps of North America (the map above is part of the collection).  The interface is virtually identical to that of Old Maps Online, however, I prefer the darker background of the Rumsey site for viewing. 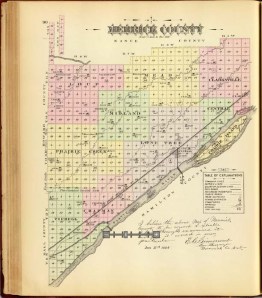 My paternal great-grandparents migrated from West Virginia to Nebraska. Five children were born in Nebraska, and I believe their first-born, Annie died there. A draft card pinpoints the birthplace of one child in Central City, Nebraska.

Borders have a way of changing through the years.  As territories became states and states sometimes spawned new states or disputed ownership of land with other states, the lines that designated where one place ended and the other began evolved.  Even within states, counties grew, shrank, were created, or disappeared.

You can view these changes on this atlas.  Choose the state you are interested in, type in a date, and you can view the borders at that time.  You have the option of also comparing them with the current county borders.  I have found it useful when trying to track down relatives when they haven’t moved, but the borders did. 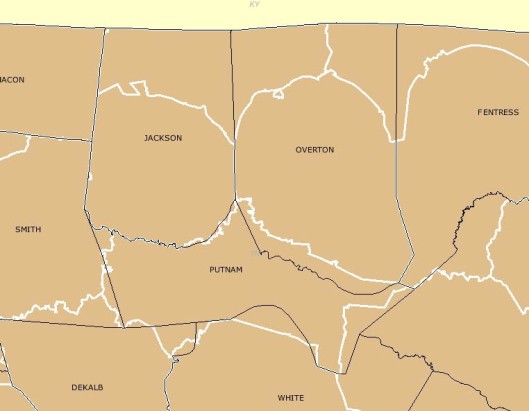 My maternal great-grandparents resided in Putnam County, Tennessee, and I believe the family stayed in the same area for several generations. This is a map of the borders around the time of the county’s original formation in 1842. The black lines represent the county boundaries as of that date; the white lines indicate the current county borders. 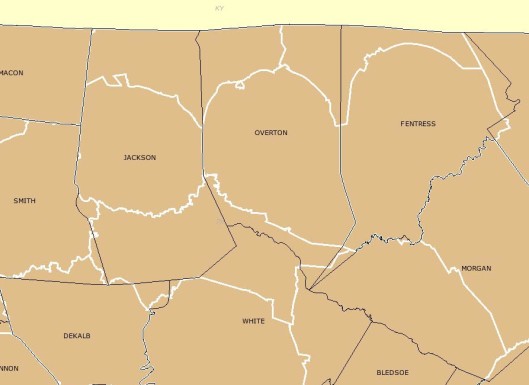 As you can see, this map, showing the borders as of June 1, 1850 doesn’t show Putnam county. That’s because its initial formation was declared unconstitutional. I would need to look in the counties that took over the land to see where the family is. A hint on Ancestry.com leads me to believe that in 1850, they were enumerated in White county, which comprises a big chunk of southeastern Putnam county’s future borders. 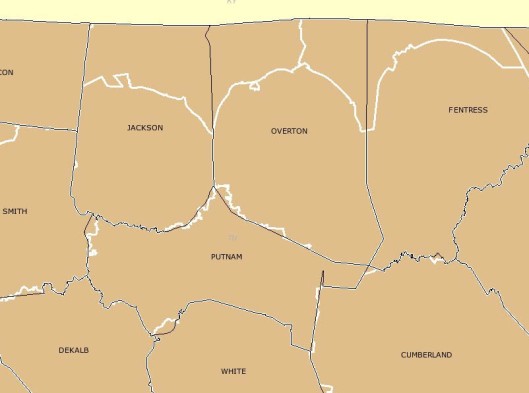 In 1854, Putnam County was officially reestablished and back on the map. This map as of June 1, 1860 shows that the shape was redrawn differently than it originally looked in 1842, and its shape was a lot closer to that of its modern place on the map.

Stanford University compiled data from the Library of Congress‘ “Chronicling America” project to create this unique map.  Over 140,000 newspapers in over 3 centuries are represented.  What I like about this map is it helps me to determine what newspapers were in print for a particular place at any given point in time.  There are also links that will show where archives of these papers can be found in libraries across the country.  Best of all, several papers are available digitally and be searched and viewed for free. 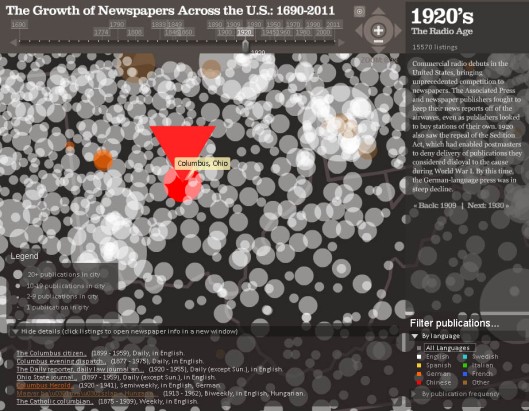 Bill’s paternal great-grandparents settled in Columbus, Ohio after immigrating from Hungary. This image shows how many papers they would have had access to in 1920. There was at least one publication that was printed in both English and Hungarian. I wonder if they were subscribers.

As you can see, maps can help in our research of our ancestors.  They may give us a better view of the land as it was when they lived.  Maps can show the surroundings and give us a better understanding of how things looked before modern streets, roads, and buildings became part of the landscape.  Maps can show the changes in boundaries between counties and states, and perhaps help us track down a relative.  Maps can even be used to give us a visual representation of data that might help us discover records unlocking key clues in our genealogical journeys.  I hope that some of these resources might help you as much as they have helped me.  If you have other map resources that you have found, please share them.

2 thoughts on “Mad About Maps”